With an Olympic gold medal in hand, Gabby Douglas has inspired the world.  She has won the gold medal in the women's all around gymnastics event, being the first woman to win the gold in both the team event and all-around.

Her amazing story is show in the video below.  It talks about how her mother raised her and allowed her to live with another family to train for the Olympics.  It's a really heartwarming story, especially now that she has won a gold medal!  A wonderful quote from Gabby's mother was: "there is no greater joy, than for a parent to see their child reach their dream."

LONDON – From the top of the podium, with the final bars of the national anthem still echoing through the gymnastics hall, Gabby Douglas's smile seemed even brighter.

And it is the smile that will haunt every other competitor she left in a heap behind her – the sweet, wonderful smile of one of the most cold-blooded sporting assassins you'll ever find.

Gabby Douglas won women's gymnastics all-around gold on Thursday by delivering another near-flawless four events, all while crushing the confidence and infuriating the will of the rest of the field, most notably the two determined Russians she shared the podium with, Victoria Komova and Aliya Mustafina.

The Russians were more decorated and more experienced and trained at a higher level for a longer period of their life.

They never really stood a chance.

Douglas – the first U.S. woman ever to win gold in both the team competition and all-around – took the lead from the start and never relinquished it, allowing Komova and Mustafina to make errors, whether small or great, they could never recover from. In the end, she merely waited out the final result, nursing a lead until Komova's final result on the floor exercise was shown on the scoreboard.

Komova needed a 15.360 to pass Douglas. She received only a 15.1, immediately bursting into tears in her coach's arms. Across the way, Douglas jumped in celebration as chants of "U-S-A! U-S-A!" rained down around her.

Later, Komova was so distraught she wouldn't even wear her silver medal in the media mixed zone, claiming it was "too heavy" as she wore a look of frustration. It was just on Tuesday that she cried hard after the United States, anchored by Douglas's four strong performances, defeated the Russians for team gold.

Here it was again, the Russians running up against an almost perfect gymnastics machine, equal parts talent, mental toughness, and sweet intimidation.

Douglas's four all-around scores ranged from 15.033 to 15.996, allowing her to play catch-me-if-you-can while rattling opponents who by now know she won't crack. She has scored 15.000 or better in 11 of 12 performances across three days here, which is unheard-of consistency.

She may not have the look of those steely old Eastern European gymnastic machines. She merely has the results. If anything, she is even more intimidating, this bouncing ball of energy that nails routine after routine and then simply smiles wide and walks off the mat like these Olympics are no big thing.

"She very much reminded me of one of the other great athletes of my coaching career," Bela Karolyi, the legendary coach, said after.

"Nadia," Karolyi said, smiling at the memory of Nadia Comaneci, who won all-around gold at the 1976 Games with a series of perfect 10s.

The first African American all-around champion reminds him of that lithe, 14-year-old Romanian?

"Same little skinny thing," Karoyli said. "Don't care about nothing. In that arena they were rooting for the Russians like crazy, but no one could touch [Nadia]. Gabby is t 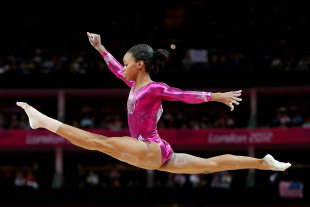 (Getty Images)he prototype, with no experience, with no hesitations, just going out there with no second thoughts and just performing."

Douglas always had talent but needed first to move from Virginia Beach to Iowa, at just 14, and receive better training to harness it. She fought through a million lonely nights, homesick mornings, and afternoon practice sessions that pushed her to places she never imagined possible.

And all of sudden this year, she became the world's greatest gymnast. First she surged past her teammate, Jordyn Wieber, the reigning world champion and pre-Olympic favorite. Then she arrived here just like little Nadia, without the weight of expectations, without the knowledge of fear, without the concern of failure.

Gabby Douglas doesn't hide from pressure. She covets it.

"The pressure [means] 'Game on,' " Douglas said on Thursday. "The pressure should make us do better and greater things. It helps me. It motivates me. It definitely pumps you up and you get so hyped up you want to stick every landing and get as many 10s as you can."

Pressure is what contributed to Mustafina falling off the beam while trying to land a full flip with a twist that Douglas, of course, would later nail with aplomb.

Pressure is what helped Douglas, with a lead going into the final floor routine, essentially with the all-around gold on the line as the relentless Komova loomed, to just grow excited by the opportunity.

"I just wanted to show off and perform," she said, like it was just another dance. "Treat it like trials."

"You have to learn how to perform and seize the moment."

After Douglas drilled a 15.033, Komova was left trying to attempt some near-impossible score to beat her. She couldn't.

The pressure is what drives the smile, and the smile is what drives everything – her incredible inner toughness, her soaring popularity, and her devastated string of opponents. She could still win two more golds here, in uneven bars and balanced beam. Bet against her at your own peril.

"Rock solid," Bela crowed. "Three nights in a row with no mistake whatsoever."

And so there on the top of that podium, the smile was bigger and brighter than ever. There was no more pressure. There was no more joy of competition. This was just the emotion of accomplishment, of a superstar peaking at the perfect moment, of a little girl who dreamed big, dared to follow, and now was standing on top of a most golden world.

In that moment, she could afford to briefly shut down the high wattage. For a quick second, just before she stepped down, she pulled her lips into a kiss and blew it toward her proud mother, Natalie Hawkins, the supportive force who let her go and grow, in the front row of section 112.

Then Gabby Douglas, somehow, managed to smile even brighter.